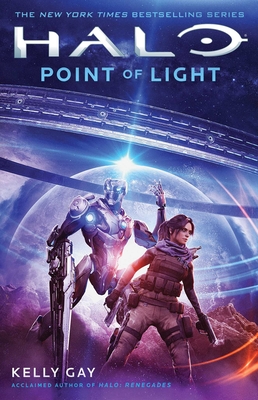 This is book number 28 in the Halo series.

An original full-length novel set in the Halo universe and based on the New York Times bestselling video game series!

August 2558. Rion Forge was once defined by her relentless quest for hope amidst the refuse and wreckage of a post-Covenant War galaxy—years spent searching for family as much as fortune. But that was before Rion and the crew of her salvager ship Ace of Spades encountered a powerful yet tragic being who forever altered their lives. This remnant from eons past, when the Forerunners once thrived, brought with it a revelation of ancient machinations and a shocking, brutal history. Unfortunately, the Ace crew also made dire enemies of the Office of Naval Intelligence in the process, with the constant threat of capture and incarceration a very real possibility. Now with tensions mounting and ONI forces closing in, Rion and her companions commit to this being’s very personal mission, unlocking untold secrets and even deadlier threats that have been hidden away for centuries from an unsuspecting universe....

Kelly Gay is the critically acclaimed author of the Charlie Madigan urban fantasy series. She is a multi-published author with works translated into several different languages. She is a two-time RITA nominee, an ARRA nominee, a Goodreads Choice Award Finalist, and a SIBA Book Award Long List finalist. Kelly is also the recipient of the North Carolina Arts Council Fellowship Grant in Literature. She has authored the short story, “Into the Fire,” featured in Halo: Fractures, and the novella, Halo: Smoke and Shadow. She can be found online at KellyGay.com.