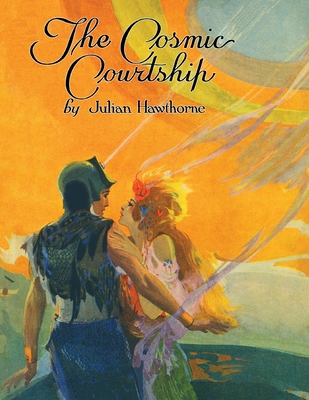 Mary Faust, a brilliant scientist, has developed a machine that can allow the conscious human soul to explore the cosmos Her promising young assistant Miriam Mayne has accidentally transferred her consciousness to Saturn, where she falls under the enchantment of an evil sorcerer Jack Paladin, her love, sets out after her on a thrilling celestial journey to the ringed planet Swashbuckling adventure and high romance await in Julian Hawthorne's The Cosmic Courtship

While most are at least somewhat familiar with Nathaniel Hawthorne as one of the great American authors, less well known is that his son Julian was an incredibly prolific writer in his own right. Julian wrote on a wide variety of subjects, ranging from literary analysis of his father's works to poetry to period romances and adventures. Late in his career, Julian even dabbled in the emerging genre of Science Fiction.

The Cosmic Courtship was serialized in Frank A. Munsey's All-Story Weekly across four issues, beginning with the November 24, 1917 issue and running through the December 15, 1917 issue. While this story has been in the public domain for some time, it has never been collected or published elsewhere until now.