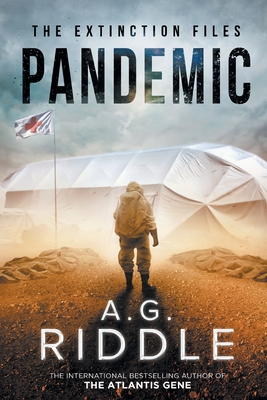 This is book number 1 in the Extinction Files series.

"Reads like a superior collaboration between Dan Brown and Michael Crichton."
-The Guardian Experience the pulse-pounding thriller that will change everything you think you know about pandemics. And might save your life. Now a Wall Street Journal bestseller. A deadly pandemic has begun...
But this outbreak is different. It may alter the human race forever-and reveal a shocking truth about humanity's future. The race is on to stop it. A hundred miles north of Alaska, an American Coast Guard vessel discovers a sunken submarine at the bottom of the Arctic Ocean. It has no national identification and doesn't match the records of any known vessel. Deep within, researchers find evidence of a scientific experiment that will rewrite our basic understanding of the human race. In Atlanta, Dr. Peyton Shaw is awakened by the phone call she has dreaded for years. As the CDC's leading epidemiologist, she's among the first responders to outbreaks around the world. It's a lonely and dangerous job, but it's her life-and she's good at it. This time, she may have met her match. In Kenya, an Ebola-like pathogen has infected two Americans. One lies at death's door. With the clock ticking, Peyton assembles her team and joins personnel from the Kenyan Ministry of Health and the WHO. What they find in the remote village is beyond their worst fears. As she traces the origin of the pathogen, Peyton begins to believe that there is more to this outbreak-that it may be merely the opening act in a conspiracy with far reaching consequences. In Berlin, Desmond Hughes awakens in a hotel room with no memory of how he got there or who he is. On the floor, he finds a dead security guard from an international pharmaceutical company. His only clue leads him to Peyton Shaw-a woman who seems to know him, but refuses to tell him how. With the police searching the city for him, Desmond desperately tries to piece together what happened to him. To his shock and horror, he learns that he may be involved in causing the outbreak-and could hold the only key to stopping it. As the pathogen spreads around the world, Peyton and Desmond race to unravel the conspiracy behind the pandemic-and uncover secrets some want to keep buried. With time running out, they face an unimaginable decision. Get your copy now. SELECTED PRAISE AND PUBLISHED REVIEWS "I finished the book fast because I just couldn't wait..."
-WIRED GeekDad on Departure "Riddle makes an effort to keep the focus on how his characters react to each other (including to their future selves) rather than to the technological marvels that reshaped their world."
-Publisher's Weekly on Departure "Well-constructed and tightly-wound as a fine Swiss watch-Departure has non-stop action, an engaging plot and, of course, wheels within wheels."
-Diana Gabaldon, #1 New York Times bestselling author of Outlander on Departure About Pandemic Pandemic is the first new novel in almost three years from A.G. Riddle, the worldwide bestseller with over FOUR MILLION COPIES SOLD. The product of extensive research, Pandemic takes readers inside the CDC and WHO response to a deadly outbreak. Fans of Dan Brown, Michael Crichton, Preston and Child, and James Rollins are raving about the The Extinction Files, giving it 18,000+ ratings on GoodReads.