The Fires Beneath the Sea: a novel (Hardcover) 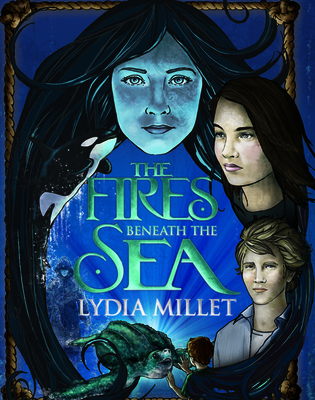 By Lydia Millet
Email or call for price
Special Order

Kirkus Reviews Best Books of 2011 Cara's mother has disappeared. Her father isn't talking about it. Her big brother Max is hiding behind his iPod, and her genius little brother Jackson is busy studying the creatures he collects from the beach. But when a watery specter begins to haunt the family's Cape Cod home, Cara and her brothers realize that their scientist mother may not be who they thought she was--and that the world has much stranger, much older inhabitants than they had imagined. With help from Cara's best friend Hayley, the three embark on a quest that will lead them from the Cape's hidden, ancient places to a shipwreck at the bottom of the sea. They're soon on the front lines of an ancient battle between good and evil, with the terrifying "pouring man" close on their heels. Packed with memorable characters and thrilling imagery, Lydia Millet weaves a page-turning adventure even as she brings the seaside world of Cape Cod to magical life. The first in a series of books about the Sykes children, The Fires Beneath the Sea is a rip-cracking middle-grade novel that will make perfect beach reading--for readers of any age The Fires Beneath the Sea is the first novel in the Dissenters series. The second novel, The Shimmers in the Night will be published in 2012. Lydia Millet is the author of six previous novels, including My Happy Life, which won the 2003 PEN-USA Award for Fiction, and Oh Pure and Radiant Heart, which was shortlisted for the Arthur C. Clarke Award. Her short story collection Love in Infant Monkeys was a 2010 Pulitzer Prize finalist.

Lydia Millet is the author of six previous novels, including My Happy Life, which won the 2003 PEN-USA Award for Fiction, and Oh Pure and Radiant Heart, which was short-listed for the Arthur C. Clarke Award. Her short story collection Love in Infant Monkeys was a 2010 Pulitzer Prize finalist.

Selected for the ABC Best Books for Children Catalog

"An intriguing mix of everyday activities and the otherworldly, The Fires Beneath the Sea pulls readers in. Cara is a likable character who has been put in the uncomfortable position of trying to save her family and help her mother with a mission way beyond the ability of most tweens. Her bravery and fierce love will cause readers to long for her to succeed. A well-done beginning, with some riveting moments and frightening escapes, to what should prove to be a popular series.”
—School Library Journal

* “Millet’s prose is lyrically evocative (“the rhythmic scoop and splash of their paddles”). A lush and intelligent opener for a topical eco-fantasy series.”
—Kirkus Reviews (starred review)

“A thoughtful and thought-provoking beginning to a new fantasy series. The Cape Cod woods, wildlife, and beaches are depicted with loving detail, and the dark forces arrayed against the young protagonists are at once tantalizingly mystifying and alarmingly timely.”
—Patricia McKillip

“Lydia Millet knows the sea like a selkie. The Fires Beneath the Sea smells of salt and tastes of mist, and that beauty speaks as strongly as its story of peril and hope for the future of our fragile world.”
—Kathe Koja, author of Talk