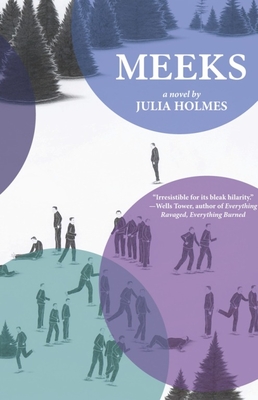 “Holmes has created a fabulously surreal dystopia where to be married is the only way to find true happiness. Bachelors spend their days cultivating skills to impress ladies in what is essentially a lottery, and if they aren't successful, they are consigned to a life of civil service (or worse). Darkly comic and lyrical, MEEKS provides a unique satirical lens to look at our own changing perceptions of marriage, home life, and success.”
— Emily Pullen, Skylight Books, Los Angeles, CA

No woman will have Ben without a proper bachelor's suit . . . and the tailor refuses to make him one. Back from war with a nameless enemy, Ben finds that his mother is dead and his family home has been reassigned by the state. As if that isn't enough, he must now find a wife, or he'll be made a civil servant and given a permanent spot in one of the city's oppressive factories.

Meanwhile, Meeks, a foreigner who lives in the park and imagines he's a member of the police, is hunted by the overzealous Brothers of Mercy. Meeks' survival depends on his peculiar friendship with a police captain--but will that be enough to prevent his execution at the annual Independence Day celebration?

A dark satire rendered with the slapstick humor of a Buster Keaton film, Julia Holmes' debut marries the existentialism of Fyodor Dostoevsky's Notes from Underground to the strange charm of a Haruki Murakami novel. Meeks portrays a world at once hilarious and disquieting, in which frustrated revolutionaries and hopeful youths suffer alongside the lost and the condemned, just for a chance at the permanent bliss of marriage and a slice of sugar-frosted Independence Day cake.

Julia Holmes was born in Dhahran, Saudi Arabia, and grew up in the Middle East, Texas, and New York, where she is currently an assistant editor at Rolling Stone. She is a graduate of Columbia University's MFA program in fiction.

Julia Holmes was born in Dhahran, Saudi Arabia, and grew up in the Middle East, Texas, and New York, where she is currently an assistant editor at Rolling Stone. She is a graduate of Trinity University and of Columbia University's MFA program in fiction. Meeks is her first novel.

A highly imaginative debut finds a stark Darwinian logic in a rigidly hierarchical society. . . . Holmes has fashioned a terrifying and utterly convincing world in which the perfect human being is one stripped of all illusions.”Publishers Weekly

Meeks is a feat of desolating literary spellcraft, irresistible for its bleak hilarity and the sere brilliance of Julia Holmes’s prose.”Wells Tower (author of Everything Ravaged, Everything Burned)

The world of Meeks is cruel, cold, and weird, suffocating in laws so strange they very nearly resemble our own. Julia Holmes is that rare artist who, with invention and mythology, reveals nothing less than the most secret inner workings of the real world we overlook every day. A masterful debut by a writer of the most forceful originality.”Ben Marcus (author of Notable American Women)

Oh bachelors, poor bachelors, pining for their pale suitsthese needy men, so poignant in their search for wives, will break your heart in twain. Splendid and limping, hilarious and painful, a quiet perfection in its idiosyncrasy, the powerful alternate reality of Meeks is also an unforgettable truth. You’ll never see marriage the same way again.”Lydia Millet (author of Oh Pure and Radiant Heart)

The life of a bachelor is always hard, but in Meeks it’s truly desperate: if you don’t have the right suit then it’s either the Brothers of Mercy or the factories. Julia Holmes’s lucid prose tightens the noose of this curious world around your readerly neck before you even know what’s hit you. An invisible enemy, a pageant, a fashion system whose signification would stymie Roland Barthes, and a society that demands everyone rush quickly to fill their odd social slot, makes Meeks a unique (and uniquely imaginative) nightmare and a severely engrossing read.”Brian Evenson (author of Fugue State)

Pity the young gentleman set loose in this world of cruel tailors, perpetual war, large-scale civic pastry and the untold rivalries of the Bachelor House! With her uncommonly assured first novel, Julia Holmes channels the surreal paranoia of Poe and the dark-comic melodrama of a lost Guy Maddin script. The strangest, most compelling debut you’ll read this year.”Mark Binelli (author of Sacco and Vanzetti Must Die!)

The satire here has plenty of bite, but instead of winking at the reader, Holmes evokes her world with luminous prose.”—Los Angeles Times