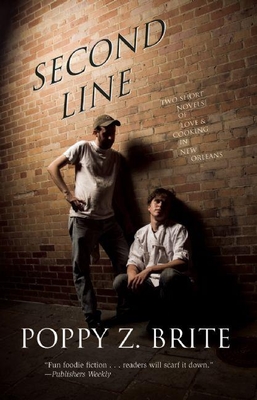 hese two short novels bookend Poppy Z. Brite's cheerfully chaotic series starring two chefs in New Orleans. The Value of X introduces G-man and Rickey, who grew up in New Orleans' Lower Ninth Ward and who are slowly realizing there are only two important things in life: cooking and each other. Rickey's parents aren't quite so taken with the boy's plans and get him an impossible-to-resist place at the Culinary Institute of America.

In D*U*C*K, Rickey and G-man's restaurant, Liquor, is doing well but there are the usual complications of running a kitchen: egos get bruised, people get fired . . . and then Rickey is jumped in an alley by one of their ex-waiters.

On the mend, Rickey takes a side job to cater the annual Ducks Unlimited banquet, where every course must, of course, include the ducks the hunters have bagged. Rickey's crew are ready to meet the challenge, but Rickey's not sure he can do it all and deal with the guest of honor--his childhood hero, former New Orleans Saints quarterback Bobby Hebert.

Fun foodie fiction, and readers will scarf it down as quickly as a plate of blackened crawfish.--Publishers Weekly

Originally published in limited hardcover editions, these two novels are full of the pure joy of love, hard work, and great food and are a tremendous extension (or introduction) to Brite's series.

"A high-end restaurant is...a gift that keeps on giving. The heat, the bickerings and intrigue, the pursuit of perfection, the dodgy money keeping it all afloate: the setting spawns plots...Can the Liquor] franchise sustain itself? The answer is yes."--New York Times

"Steeped in spicy dialogue and New Orleans] flavor...a behind-the-swinging-door peek into the world of chefs."--Entertainment Weekly

Poppy Z. Brite's fiction set in the New Orleans restaurant world includes Prime, Liquor, and Soul Kitchen. She has also published five other novels and three short story collections. She lives with her husband Chris, a chef, in New Orleans.