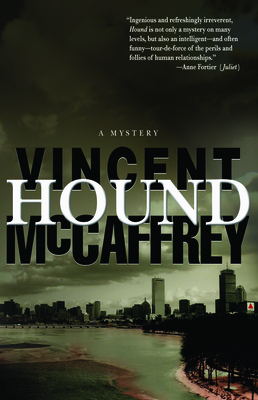 Death was, after all, the way Henry made his living.

A bookhound, Henry Sullivan buys and sells books he finds at estate auctions and library sales around Boston and often from the relatives of the recently deceased. He's in his late thirties, single, and comfortably set in his ways. But when a woman from his past, Morgan Johnson, calls to ask him to look at her late husband's books, he is drawn into the dark machinations of a family whose mixed loyalties and secret history will have fatal results.

Hound, the first novel featuring Henry Sullivan, is the debut work of a longtime Boston bookseller. It is a paean to books, bookselling, and the transformative power of the printed word. Even as it evolves into a gripping murder mystery, it is also a reminder that there are still quiet corners of the world where the rhythms of life are calmer, where there's still time for reading, time for getting out for a beer with friends, time to investigate the odd details of lives lived on the edges of the book world.

As the true story unfolds, its mysteries are also of the everyday sort: love found and love lost, life given and life taken away. At the center is Henry himself, with his troubled relationships and his love of old books. There's his landlady Mrs. Prowder whose death unsettles Henry's life and begins the sequence of events that overturns it. There's the secret room his friend Albert discovers while doing refuse removal, a room that reveals the story of a woman who lived and loved a century ago.

And throughout the novel are those of us whose lives revolve around books: the readers, writers, bookstore people, and agents--as well as Henry, the bookhound, always searching for the great find, but usually just getting by, happy enough to be in the pursuit.

"McCaffrey, the owner of Boston's legendary Avenue Victor Hugo Bookshop, succeeds in conveying his love of books in his intriguing debut."
--Publishers Weekly

"Hound is billed as a mystery, and it's a good one, but its fuse is long and its pace befitting an old bookshop. That's a good thing. There's something charismatic and timeless about the way the story builds and McCaffrey opens Henry's life to the reader. It wasn't until the action started to heat up about 100 or so pages in that we remembered we were reading a mystery at all. And while we're a little tired of books about books and the people who love them--which often come off more as marketing initiatives-- McCaffrey is never cloying or playing to demographic. He's just telling a compelling, old-school yarn, the kind of story a man who knows his literature tells."
--Time Out Chicago

"Vincent McCaffrey's debut mystery is crammed with stories, with likable, eccentric characters, much like his marvelous Avenue Victor Hugo Bookshop--of all the bookstores in the world, the one I still miss most of all. Like all good mysteries, Hound concerns more than murder: it's rich in detail and knowledgeable asides about bookselling, the world of publishing, and life lived in the pubs, shabby apartments, penthouses, and strange corners of the city of Boston."
--Kelly Link, author of Pretty Monsters

McCaffrey's bookseller, Henry Sullivan, is as endearing, frustrating, and compelling a character I've come across in some time. Hound is more than Henry's show, however. It's a slow burn murder mystery, a sharp character study, a detailed exploration of Boston, and a mediation on the secrets of history--both personal and universal. But I'm wasting our precious time trying to pigeonhole his wonderful first novel. Hound is, quite simply, a great book.
--Paul Tremblay, author of The Little Sleep.

Vincent McCaffrey has owned and operated the Avenue Victor Hugo Bookshop for more than thirty years, first in Boston, and now online from Abington, Massachusetts. He has been paid by others to do lawn work, shovel snow, paint houses, and to be an office-boy, warehouse grunt, dishwasher, waiter, and hotel night clerk. He has since chosen at various times to be a writer, editor, publisher, and bookseller. He can still remember the first time he sold books for money in 1963--and what most of those books were. Hound is his first novel.

Vincent McCaffrey has owned and operated the Avenue Victor Hugo Bookshop for more than thirty years, first in Boston, and now online from Abingdon, MA. Hound is his first novel.