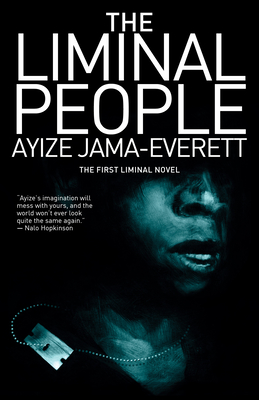 The Liminal People is the first of Ayize Jama-Everett's Liminal novels.

Membership in the razor neck crew is for life. But when Taggert, who can heal and hurt with just a touch, receives a call from the past he is honor bound to try and help the woman he once loved try to find her daughter. Taggert realizes the girl has more power than even he can imagine and has to wrestle with the nature of his own skills, not to mention risking the wrath of his enigmatic master and perhaps even the gods, in order keep the girl safe. In the end, Taggert will have to delve into the depths of his heart and soul to survive.

After all, what really matters is family.

The fourth and final Liminal novel, Heroes of an Unknown World, will be published in 2022.

Ayize Jama-Everett was born in 1974 and raised in Harlem, New York. Since then he has traveled extensively in Northern Africa, New Hampshire, and Northern California. He holds a Master's in Clinical Psychology and a Master's in Divinity. He teaches religion and psychology at Starr King School for the Ministry when he's not working as a school therapist at the College Preparatory School. He is the author of three novels, The Liminal People, The Liminal War, and The Entropy of Bones, as well as an upcoming graphic novel with illustrator John Jennings entitled Box of Bones, and has written for The Believer and the LA Review of Books, among others. When not educating, studying, or beating himself up for not writing enough, he's usually enjoying aged rums and practicing his aim.

Ayize Jama-Everett has brewed a voodoo cauldron of Sci-Fi, Romance, Crime, and Superhero Comic, to provide us with a true gestalt of understanding, offering us both a new definition of family” and a world view on the universality of human conduct. The Liminal Peopleas obviously intendedwill draw different reactions from different readers. But none of them will stop reading until its cataclysmic ending.”
Andrew Vachss

Ayize’s imagination will mess with yours, and the world won’t ever look quite the same again.”
Nalo Hopkinson

The Liminal People has the pleasures of classic sf while being astonishingly contemporary and savvy.”
Maureen F. McHugh