Three Messages and a Warning: Contemporary Mexican Short Stories of the Fantastic (Paperback) 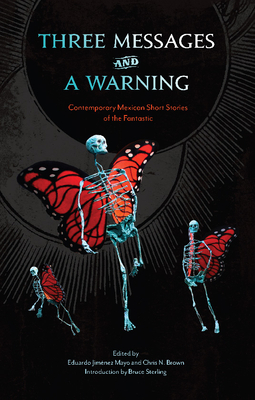 A huge, energetic, and ambitious groundbreaking anthology from emerging and established Mexican authors which showcases all-new supernatural folktales, alien incursions, ghost stories, apocalyptic narratives, and more. Stereotypes of Mexican identities and fictions are identified and transcended. Traditional tales rub shoulders with mindbending new worlds. Welcome to the new Mexican fantastic. Eduardo Jim nez Mayo's translations include books by Bruno Esta ol, Rafael P rez Gay, and Jos Mar a P rez Gay.
Chris N. Brown lives in Austin, Texas. He is a contributor to the blog No Fear of the Future.
Bruce Sterling lives in Turin, Italy, and blogs at Wired's Beyond the Beyond.

By turns creepy, self-consciously literary, and engagingly inventive, these 34 stories selected by translator-scholar Jiménez Mayo and writer-critic Brown offer some excellent and ghastly surprises. . . . These are punchy, ghoulish selections by south-of-the-border writers unafraid of the dark.”
Publishers Weekly

Encompassing a definition of fantasy that includes the extraterrestrial, the supernatural, the macabre, and the spectral, these stories are set in unusual locales and deal with bizarre characters. All are very short (some just two pages), and most offer a surprise twist at the end, though occasionally the only reaction these endings may elicit from the reader is Huh?” The universal scope of the themes transcends the Mexican provenance; for example, one detects an apocalyptic influence in Liliana V. Blum’s Pink Lemonade,” and Argentine Julio Cortázar’s Bestiary” influences Bernardo Fernández’s Lions.” Most of the volume’s 34 authors, half of whom are women, are relatively unknown to American readers, and for many of them, publication in this anthology represents their first exposure to an English-reading audience. The translations, several of which were done by the editors, convey the individuality, if not idiosyncrasies, of these tales. VERDICT This collection will appeal mostly to fans of fantasy and sf and, to a lesser degree, those interested in contemporary Mexican literature.”
Library Journal