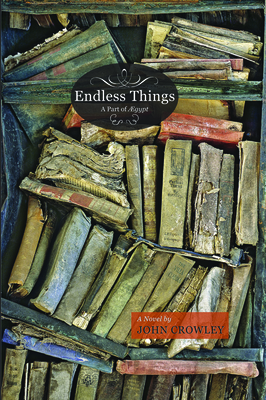 Praise for the gypt sequence:

With Little, Big, Crowley established himself as America's greatest living writer of fantasy. gypt confirms that he is one of our finest living writers, period.
--Michael Dirda

A master of language, plot, and characterization.
--Harold Bloom

The further in you go, the bigger it gets.
--James Hynes

The writing here is intricate and thoughtful, allusive and ironic. . . . gypt bears many resemblances, incidental and substantive, to Thomas Pynchon's wonderful 1966 novel The Crying of Lot 49.
--USA Today

This is the fourth novel--and much-anticipated conclusion--of John Crowley's astonishing and lauded gypt sequence: a dense, lyrical meditation on history, alchemy, and memory. Spanning three centuries, and weaving together the stories of Renaissance magician John Dee, philosopher Giordano Bruno, and present-day itinerant historian and writer Pierce Moffitt, the gypt sequence is as richly significant as Lawrence Durrell's Alexandria Quartet or Anthony Powell's Dance to the Music of Time. Crowley, a master prose stylist, explores transformations physical, magical, alchemical, and personal in this epic, distinctly American novel where the past, present, and future reflect each other.

It is a work of great erudition and deep humanity that is as beautifully composed as any novel in my experience.
--Washington Post Book World

With Endless Things and the completion of the gypt cycle, Crowley has constructed one of the finest, most welcoming tales contemporary fiction has to offer us.
--Book Forum

Crowley's peculiar kind of fantasy: a conscious substitute for the magic in which you don't quite believe any more.
--London Review of Books

A beautiful palimpsest as complex, mysterious and unreliable as human memory.
--Seattle Times

This year, while millions of Harry Potter fans celebrated and mourned the end of their favorite series, a much smaller but no less devoted group of readers marked another literary milestone: the publication of the last book in John Crowley's gypt Cycle.
--Matt Ruff

Crowley's eloquent and captivating conclusion to his gypt tetralogy finds scholar Pierce Moffet still searching for the mythical gypt, an alternate reality of magic and marvels that have been encoded in our own world's myths, legends and superstitions. Pierce first intuited the realm's existence from the work of cult novelist Fellowes Kraft. Using Kraft's unfinished final novel as his Baedeker, Pierce travels to Europe, where he spies tantalizing traces of gypt's mysteries in the Gnostic teachings of the Rosicrucians, the mysticism of John Dee, the progressive thoughts of heretical priest Giordano Bruno and the "chemical wedding" of two 17th-century monarchs in Prague. Like Pierce's travels, the final destination for this modern fantasy epic is almost incidental to its telling. With astonishing dexterity, Crowley (Lord Byron's Novel) parallels multiple story lines spread across centuries and unobtrusively deploys recurring symbols and motifs to convey a sense of organic wholeness. Even as Pierce's quest ends on a fulfilling personal note, this marvelous tale comes full circle to reinforce its timeless themes of transformation, re-creation and immortality.
--Publishers Weekly

John Crowley was born in the appropriately liminal town of Presque Isle, Maine. His most recent novel is Four Freedoms. He teaches creative writing at Yale University. In 1992 he received the Award in Literature from the American Academy and Institute of Arts and Letters. He finds it more gratifying that almost all of his work is still in print.

John Crowley was born in the apporopriately liminal town of Presque Isle, Maine, in 1942, his father then an officer in the US Army Air Corps. He grew up in Vermont, northeastern Kentucky and (for the longest stretch) Indiana, where he went to high school and college. He moved to New York City after college to make movies.