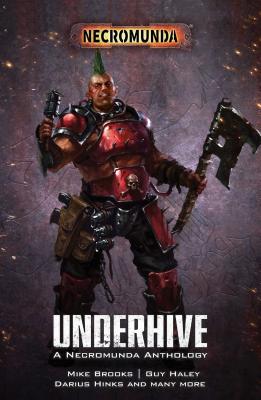 In the sprawling, polluted hive cities of Necromunda, life is a constant fight for scraps. From the highest peaks to the lowest depths, rival gangs war and spill blood in a desperate battle to increase their standing with the decadent Great Houses. Life is short and brutal, especially for those on the climb.

In the sprawling, polluted hive cities of Necromunda, life is a constant fight for scraps. From the highest peaks to the lowest depths, rival gangs war and spill blood in a desperate battle to increase their standing with the decadent Great Houses. Life is short and brutal, especially for those on the climb.

Underhive rogue Kora Zekk makes a delivery of weapons to House Orlock, expecting betrayal. A sinner tries to win his life with a story of star-crossed lovers. Goliath ganger Topek Greel seeks out an underhive legend, a killer with a terrifying record. And when a House Escher ambush goes wrong, Jarene of the Wild Cats finds herself outlawed. She has to take control and save her sisters in arms from enforcers, bounty hunters, even other gangs. Can she restore her honour, and bring the true culprits to justice?

This anthology contains the novella – Wanted:Dead by Mike Brooks – and nine short stories by some of the Black Library’s finest authors.

Mike Brooks is a speculative fiction author who lives in Nottingham, UK. His work for Black Library includes the Warhammer 40,000 novel Rites of Passage, the Necromunda novella Wanted: Dead, and the short stories ‘The Path Unclear’, ‘A Common Ground’ and ‘Choke Point’. When not writing, he works for a homelessness charity, plays guitar and sings in a punk band, and DJs wherever anyone will tolerate him.

Rachel Harrison is the author of the Warhammer 40,000 novel Honourbound, featuring the character Commissar Severina Raine, as well the accompanying short stories ‘Execution’, ‘Trials’, ‘Fire and Thunder’, ‘A Company of Shadows’, and ‘The Darkling Hours’, which won a 2019 Scribe Award in the Best Short Story category. Also for Warhammer 40,000 she has written the novel Mark of Faith, the novella Blood Rite, numerous short stories including ‘The Third War’ and ‘Dishonoured’, the short story ‘Dirty Dealings’ for Necromunda, and the Warhammer Horror audio drama The Way Out.

Darius Hinks’ first novel, Warrior Priest, won the David Gemmell Morningstar award for best newcomer. Since then he has carved a bloody swathe through the Warhammer World in works such as Island of Blood, Sigvald, Razumov’s Tomb and the Orion trilogy of Wood Elf novels. He has also ventured into the Warhammer 40,000 universe with the Space Marine Battles novella Sanctus.

In addition to numerous Warhammer 40,000 novellas and short stories, Josh Reynolds is the author of the Fabius Bile novel Primogenitor and the Blood Angels novel Deathstorm. For the Warhammer world, he has written the End Times novels The Return of Nagash and Lord of the End Times, the Gotrek & Felix novels Road of Skulls and The Serpent Queen, and the Time of Legends novels Neferata and Master of Death. He has also written a number of stories set in Warhammer’s new Age of Sigmar fantasy setting, including the Stormcast Eternal novels Black Rift and Plague Garden. He lives and works in Northampton, England.

Guy Haley is the author of the Horus Heresy novel Pharos, the Primarchs novel Peturabo and two volumes in The Beast Arises series: Throneworld and The Beheading. He has also written many Warhammer 40,000 novels, including Dante, Valedor and the Imperial Battle Tanks novels Baneblade and Shadowsword. His enthusiasm for all things greenskin led him to pen the eponymous Warhammer fantasy novel Skarsnik, as well as the End Times novel The Rise of the Horned Rat. He has also written a number of novellas and short stories set in Warhammer’s new Age of Sigmar setting. He lives in Yorkshire, England with his wife and son.

Robbie MacNiven is a Highlands-born History graduate from the University of Edinburgh. He has written the Warhammer Age of Sigmar novel Scourge of Fate and Gotrek Gurnisson novella The Bone Desert, as well as the Warhammer 40,000 novels Blood of Iax, The Last Hunt, Carcharodons: Red Tithe, Carcharodons: Outer Dark and Legacy of Russ. His short stories include ‘Redblade’, ‘A Song for the Lost’ and ‘Blood and Iron’. His hobbies include re-enacting, football and obsessing over Warhammer 40,000.

Nick Kyme is the author of the Horus Heresy novels Old Earth, Deathfire, Vulkan Lives and Sons of the Forge, the novellas Promethean Sun and Scorched Earth, and the audio dramas Red-Marked, Censure and Nightfane. His novella Feat of Iron was a New York Times bestseller in the Horus Heresy collection, The Primarchs. Nick is well known for his popular Salamanders novels, including Rebirth, the Sicarius novels Damnos and Knights of Macragge, and numerous short stories. He has also written fiction set in the world of Warhammer, most notably the Warhammer Chronicles novel The Great Betrayal and the Age of Sigmar story ‘Borne by the Storm’, included in the novel War Storm. More recently he has scripted the Age of Sigmar audio drama The Imprecations of Daemons. He lives and works in Nottingham.