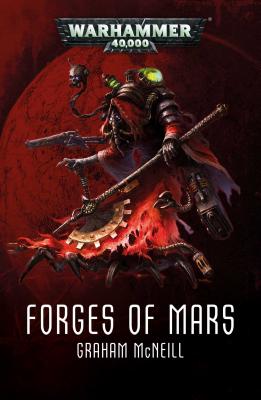 By Graham McNeill
Email or call for price
Backordered

Omnibus edition of all three novels in the Forges of Mars trilogy - Priests of Mars, Lords of Mars and Gods of Mars - as well as an additional short story.

The Martian Mechancius's thirst for knowledge is insatiable, and when Archmagos Lexell Kotov learns of an ancient expedition that went in search of the very source of life in the universe itself, he immediately assembles a powerful Explorator fleet to follow in its footsteps. Not only does Kotov have the powerful engines and warriors of the Adeptus Mechanicus to call upon, even the troops of the Imperial Guard and the vaunted Space Marines join his crusade. The way, however, is treacherous and fraught with perils both within and without the fleet. There are marvels and wonders at the edge of known space, discoveries beyond price, but there are those who believe the secrets of the universe should stay hidden and beings there who pose a danger not only to the fleet but to the Imperium itself.

Graham McNeill has written more Horus Heresy novels than any other Black Library author. His canon of work includes False Gods, Vengeful Spirit and his New York Times bestseller A Thousand Sons. Graham’s Ultramarines series, featuring Captain Uriel Ventris, is now six novels long, and he has also written the Forges of Mars trilogy featuring the Adeptus Mechanicus. For Warhammer, he has written The Legend of Sigmar trilogy, the second volume of which won the 2010 David Gemmell Legend Award.