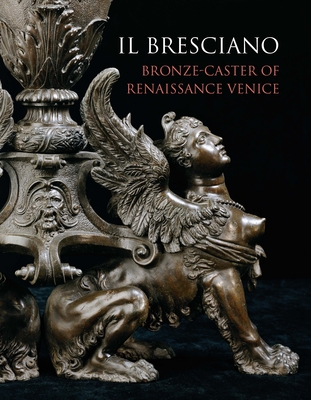 The first comprehensive study of an important Italian Renaissance bronze-caster by a leading authority.

A nucleus of sculptures cast by Andrea di Alessandri , commonly called from his native city, "Il Bresciano," or from his products, "Andrea dai bronzi," has been identified over the centuries. His style has been described as having similarities both with the High Renaissance of Sansovino and the Mannerism of Vittoria, the two successive master-sculptors of 16th-century Venice for whom he cast major bronzes. Andrea's signed masterpiece is a Paschal Candlestick in bronze, over two metres high and with sixty or more fascinating figures, made for Sansovino's magnificent lost church of Santo Spirito in 1568 and now in Santa Maria della Salute.

The author's identification in 1996 of a pair of magnificent Firedogs with sphinx feet (which in 1568 had been recommended to Prince Francesco de'Medici in Florence), and in 2015 of an elaborate figurative bronze Ewer in Verona, have been the culmination of the process of recognition. Archival research has at last revealed the span of Andrea's life as 1524/25-1573, as well as many significant facts about his family and patronage. So the time is ripe for this comprehensive, well-illustrated, book on Il Bresciano, a "new" and major bronzistà in the great tradition of north Italy.

Charles Avery is a specialist on European sculpture, particularly Italian, French, English and Flemish. A graduate of Cambridge University and the Courtauld Institute of Art, he later obtained a doctorate from Cambridge. He is a Cavaliere of the Order of Merit of Italy, and has been a Fellow of the Society of Antiquities of London and a Trustee of the British-Italian Society.

He was Deputy Keeper of Sculpture at the Victoria & Albert Museum for twelve years, then a Director of Christie's for a decade: since 1990 he has been an independent historian, writer and lecturer. His published works include Giambologna; The Complete Sculpture; Renaissance and Baroque Bronzes in the Frick Art Museum; Donatello: An Introduction; David Le Marchand (1674-1726): 'An Ingenious Man for Carving in Ivory'; Bernini, Genius of the Baroque; The Triumph of Motion: Francesco Bertos (1678-1741), A School of Dolphins and Joseph de Levis & Company: Renaissance Bronze-founders in Verona (PWP).