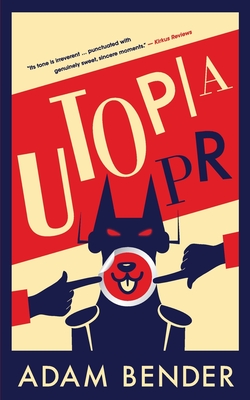 Public-relations extraordinaire Blake Hamner (the n is silent) put off his honeymoon for his big break: joining a major political campaign for president. Now, the "Hammer" struggles to make time for his marriage as Crisis Communications Manager for Our Leader, who since taking power has become increasingly mad and totalitarian.

The Hammer starts to reconsider his career choices when one of Our Leader's savage steel hounds attacks the Comms team at a press conference. He'd love to talk about his erratic job with his wife, Triple-N news anchor Maria Worthington, but they have a rule: the broadcast journalist doesn't ask Blake for inside information about his work, and the spin doctor doesn't use their relationship as leverage on what Maria reports. They say you shouldn't keep things from each other in a marriage, but it's OK-the only secrets between Blake and Maria are professional.

When a revolutionary levels grave allegations against Our Leader-and accuses Blake of distributing disinformation and propaganda to cover it up-the PR rep who thought he could talk his way out of any crisis finds himself utterly trapped in a dystopian job.

"In a tale that's reminiscent of political farces such as the HBO TV series Veep, Bender employs a smooth, amusing, and straightforward prose style that's briskly paced," says Kirkus Reviews. "Its tone is irreverent, and readers looking for a quick chuckle will likely enjoy Bender's winking comedy, which is punctuated with genuinely sweet, sincere moments."

"A dystopian novel laced with intrigue, science fiction, romance and humor," writes Gail Kaufman in a review for Reedsy Discovery. "I recommend this book to fans of dystopia who would appreciate a comedic writing style and the underlying themes of marital challenges, finding your purpose, diversity and manipulation through social media."

Adam Bender is an award-winning journalist and author of speculative fiction that explores modern-day societal fears with a mix of action, romance and humor. He is the author of The Wanderer and the New West, Divided We Fall and We, The Watched.