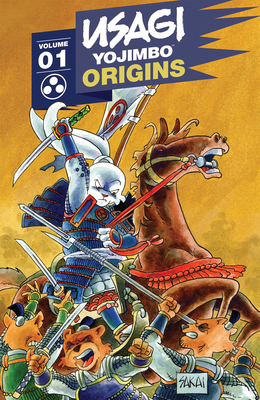 This is book number 1 in the Usagi Yojimbo Origins series.

Before his journey as a wandering, masterless samurai (ronin) began, Usagi underwent intense training under a mountain hermit, Katsuichi-Sensei, taking his first steps down the path of the warrior. Eventually, that path leads him to the pivotal battle of Adachigahara, which serves as the impetus for the host of amazing tales to come.

Collected in full color as never before, discover--or rediscover--the critical origin of Stan Sakai's most beloved character as he tells his story, setting the stage for the decades-long epic that follows.

Stan Sakai began his career by simply lettering comic books as he perfected his art and began working in the industry. He also wrote and illustrated The Adventures of Nilson Groundthumper and Hermy, a comic series with a medieval setting, influenced by Sergio Aragones's Groo the Wanderer. The characters first appeared in Albedo #1 in 1984, and were subsequently featured in issues of Critters, GrimJack, Amazing Heroes and Furrlough. Stan Sakai became famous with the creation of Usagi Yojimbo, the epic saga of Miyamoto Usagi, a samurai rabbit living in late-sixteenth and early-seventeenth-century Japan.