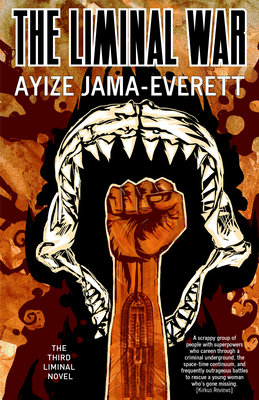 By Ayize Jama-Everett
$16.00
On Our Shelves Now

Locus Recommended Reading When Taggert's adopted daughter goes missing he suspects the hand of an old enemy. He gathers friends, family, and even those who don't quite trust that he has left his violent past behind. But their search leads them to an unexpected place, the past, and the consequences of their journey have a price that is higher than they can afford. Praise for The Liminal People: A great piece of genre fiction. But picking which genre to place it in isn't easy. The first in a planned series, it's got the twists and taut pacing of a thriller, the world-warping expansiveness of a fantasy yarn, and even the love-as-redemption arc of a romance. Oh yeah, a lot of the characters in it have superhuman powers, too.--The Rumpus Ayize's imagination will mess with yours, and the world won't ever look quite the same again.--Nalo Hopkinson An action-packed thriller and a careful look at the moral dilemmas of those whose powers transcend humanity.--Publishers Weekly The enigmatic quagmire that is Ayize Jama-Everett has been making his presence felt all across this world since 1974. In New York, California, Morocco, Ethiopia, and elsewhere, he has impressed, reviled, and astonished with his amazing feats of mental alacrity and mystical inebriation. Despite being degreed in both divinity and psychology, the forlorn artist stakes his reputation and honor on the calling of author. He is known to be cunning in the ways of the bottle, the pen, and the pistol.

Ayize Jama-Everett: Ayize Jama-Everett was born in 1974 and raised in Harlem, New York. Since then he has traveled extensively in Northern Africa, New Hampshire, and Northern California. He holds a Master's in Clinical Psychology and a Master's in Divinity. He teaches religion and psychology at Starr King School for the Ministry when he's not working as a school therapist at the College Preparatory School. When not educating, studying, or beating himself up for not writing enough, he's usually enjoying aged rums and practicing his aim.