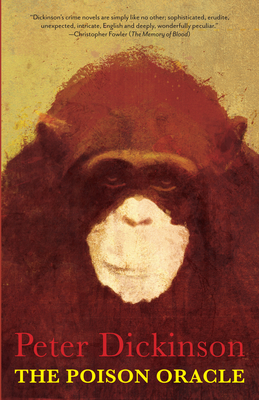 I think Peter Dickinson is hands down the best stylist as a writer and the most interesting storyteller in my genre.
--Sara Paretsky, author of Breakdown "Dickinson's crime novels are simply like no other; sophisticated, erudite, unexpected, intricate, English and deeply, wonderfully peculiar." --Christopher Fowler, author of The Memory of Blood Praise for The Poison Oracle: I have no idea if any of this talk and ac-tion is authentic, and I don't care. Either way it's marvellous.--Rex Stout Intelligent, elegantly written . . . a thoroughly enjoyable read.--Sunday Times Praise for Peter Dickinson's mysteries: He is the true original, a superb writer who revitalises the traditions of the mystery genre . . . incapable of writing a trite or inelegant sentence . . . a mas-ter.--P. D. James Consummate storytelling skill.--Peter Lovesey Take a medieval Arab kingdom, add a ruler who wants to update the kingdom's educational facilities, include an English research psycholinguist (an Oxford classmate of the ruler) invited to pursue his work on animal communication, and then add a touch of chaos in Dinah, a chimpanzee who has begun to learn to form coherent sentences with plastic symbols. When a murder is committed in the oil-rich marshes, Dinah is the only witness, and Morris has to go into the marshes to dis-cover the truth. The Poison Oracle is a novel of its time that exposes in the everyday language people use humanity's thinking and unthinking cruelties to one another and to the animals with whom we share this earth. Peter Dickinson has twice received the Crime Writers' Association's Gold Dagger. His novels include Death of a Unicorn, A Summer in the Twenties, and many more. He lives in England and is married to the novelist Robin McKinley.