Death of a Unicorn (Paperback) 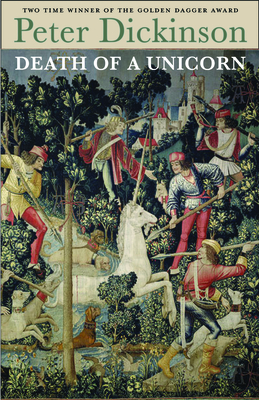 "Peter Dickinson is my own chosen demigod in the pantheon of crime fiction."
--Laurie R. King For best-selling author Lady Margaret, the past is no longer a pleasant memory. Her first lover's mysterious death and the seeming inevitability of her inheriting the family's stately home are cast in new light by secrets unwillingly revisited. The first in a series of reprints of Peter Dickinson's mysteries, this classic British mystery will win fans currently engrossed in Downton Abbey. Praise for Peter Dickinson's mysteries: A literary magician controlling an apparently inexhaustible supply of effects . . . Craftsmanship such as this makes for compulsive reading.
--Penelope Lively He is the true original, a superb writer who revitalises the traditions of the mystery genre . . . incapable of writing a trite or inelegant sentence . . . a master.
--P. D. James He sets new standards in the mystery field that will be hard to live up to.
--Ruth Rendell He has an eye and a mind and a voice like no other.
--Donald E. Westlake A fresh triumph . . . a simultaneous insight into kids and their minders, and emerging nations, and the concept of freedom - all done with consummate story-telling skill.
--Peter Lovesey Read this book carefully. It's a jewel.
--The New York Times Review Brilliantly imaginative first detective story . . .wonderfully convincing.
--The Observer Mr Dickinson is the most original crime novelist to appear for a long, long time.
--The Guardian Brilliantly original, as always.
--Times Literary Supplement Wry, witty, irresistible.
--The Financial Times Dickinson tops all his prizewinners with this stunning psychological thriller.
--Publishers Weekly Peter Dickinson has twice received the Crime Writers' Association's Gold Dagger. He lives in England and is married to the novelist Robin McKinley.