If These Pots Could Talk: Collecting 2,000 Years of British Household Pottery (Hardcover) 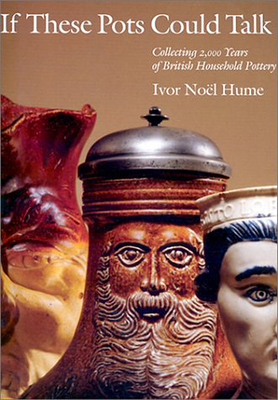 Archaeologist and social historian Ivor Nol Hume brings British history to life through his accessible story about the everyday ceramic objects he and his late wife collected over a 40-year period. If These Pots Could Talk presents "a panoramic view of pottery in Britain and her colonies from the landing of the Romans to the bad intentions of the Germans in 1939." Beginning as a novice at London's Guildhall Museum in the immediate postwar years, Nol Hume shares his passion for reconstructing lives from bits and pieces of crockery. He describes in vivid detail the common household pottery he unearthed with a bright graduate of Bristol University and the four decades of collecting (and marriage) that followed. Concentrating on earthenwares, stonewares, and porcelains commonly found in archaeological excavations but uncommonly encountered in decorative arts exhibits, his book runs the gamut from burial urns and chamber pots to wine cups and witch bottles. Cultural and even political history form the warp and weft of the narrative. Written in a personal and often humorous style, this gorgeous and hefty volume will appeal to nonspecialists and experts alike. Wonderful color photographs, largely by noted photographer Gavin Ashworth, enhance the historical and personal commentary. Part catalog, part memoir, If These Pots Could Talk is a beautiful tribute to the richness of collecting and the rewards of a true partnership.

IVOR NOEL HUME was born in London and studied at Framingham College and St. Lawrence College in England. In 1949 he joined the staff of London's Guildhall Museum as an archaeologist. He moved to Colonial Williamsburg as chief archaeologist in 1957 and subsequently became director of their Department of Archaeology. He is an honorary research associate of Smithsonian Institution, fellow of the Society of Antiquaries of London, and past vice-president of the British Society of Post-Medieval Archaeology. Author of fourteen other books, including Here Lies Virginia and Martin's Hundred, and dozens of articles, he was named an Officer of the British Empire in 1992 for contributions to British cultural interests in Virginia. He lives in Williamsburg, Virginia.