She's Such a Geek: Women Write About Science, Technology, and Other Nerdy Stuff (Paperback) 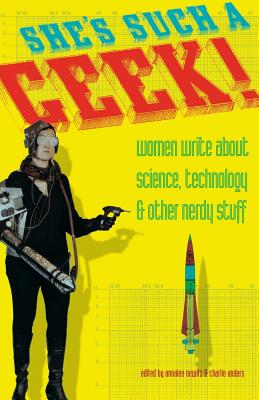 Annalee Newitz is a nationally known technology and science writer. She is a contributing editor at Wired magazine and also writes for New York magazine, Popular Science, Salon.com, New Scientist, The Believer, and the San Francisco Bay Guardian. Her syndicated column Techsploitation deals with all things geeky and runs in newspapers throughout the U.S. and Canada. In 2002, she won a Knight Science Journalism Fellowship that allowed her to spend a year at MIT researching biotech and computer networking. She is the author of Pretend We're Dead: Capitalist Monsters in American Pop Culture and the editor of two anthologies, The Bad Subjects Anthology and White Trash: Race and Class in America . She is also the co-founder of two indie magazines: other and Bad Subjects. Annalee has discussed her work on CNN, NPR, CBS, the Discovery Channel, BBC and the CBC, as well as in the New York Times and Wall Street Journal. She holds a Ph.D. in English and American Studies from the University of California Berkeley.

Charlie Anders is the author of the transgender coming-of-age novel Choir Boy, which Richard Labonte’s “Book Marks” column named one of the top 10 fiction titles of 2005 and The Lazy Crossdresser, a feminist-style manifesto for transgender women struggling with body image and gender stereotypes. Her writing has appeared in Salon.com, the San Francisco Bay Guardian, the Wall Street Journal, ZYZZYVA, Tikkun, Fresh Yarn, Pindeldyboz.com, the San Francisco Chronicle, Publisher’s Weekly, Punk Planet, the New York Press, Kitchen Sink, Watchword, and many other magazines and newspapers. She’s also written for many anthologies, including Paraspheres: New Wave Fabulist Fiction and Pills, Chills, Thrills and Heartache. Charlie co-founded other magazine with Annalee Newitz and organizes the award-winning reading series Writers With Drinks. She also created the acclaimed satirical website www.godhatesfigs.com.