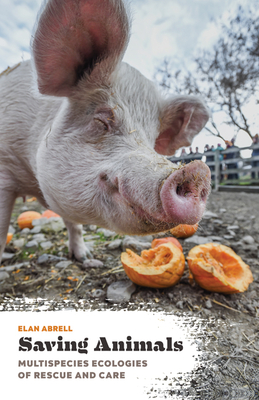 In the past three decades, animal rights advocates have established everything from elephant sanctuaries in Africa to shelters that rehabilitate animals used in medical testing, to homes for farmed animals, abandoned pets, and entertainment animals that have outlived their “usefulness.” Saving Animals is the first major ethnography to focus on the ethical issues animating the establishment of such places, where animals who have been mistreated or destined for slaughter are allowed to live out their lives simply being animals.

Based on fieldwork at animal rescue facilities across the United States, Elan Abrell asks what “saving,” “caring for,” and “sanctuary” actually mean. He considers sanctuaries as laboratories where caregivers conceive and implement new models of caring for and relating to animals. He explores the ethical decision making around sanctuary efforts to unmake property-based human–animal relations by creating spaces in which humans interact with animals as autonomous subjects. Saving Animals illustrates how caregivers and animals respond by cocreating new human–animal ecologies adapted to the material and social conditions of the Anthropocene.

Bridging anthropology with animal studies and political philosophy, Saving Animals asks us to imagine less harmful modes of existence in a troubled world where both animals and humans seek sanctuary.

"When Elan Abrell visited VINE, we put him to work mucking out the barn. He threw himself into the work whole-heartedly, seizing the opportunity to immerse himself in everyday life at the sanctuary. We could see that he understood why we require visitors to help co-create our community by adding their own labor to the mix. In Saving Animals, Abrell brings the same combination of vigor, rigor, and acuity to the challenge of thinking care-fully about the many ethical questions that arise in the course of rescue and sanctuary work."—pattrice jones, cofounder of VINE Sanctuary