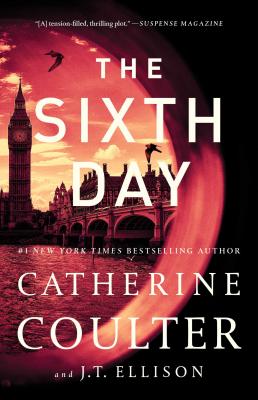 Special agents Nicholas Drummond and Michaela Caine take on a criminal mastermind in the next captivating thriller in the New York Times bestselling A Brit in the FBI series. “Coulter and Ellison smoothly mix contemporary political issues with eerie historical legend in this fast-paced” (Publishers Weekly) thriller.

When several major political figures die mysteriously, officials blame their deaths on natural causes. However, when a small drone is spotted at the scene of the most recent death, it quickly becomes clear to FBI agents Nicholas and Michaela that there’s more to this mystery than meets the eye.

Dr. Isabella Marin is a language expert, and she’s dedicated her entire life to researching an ancient text that has long been considered indecipherable…that is, until now. When it becomes clear that there’s an alarming pattern between the text and the recent deaths, she teams up with the FBI to find the link. It’s clear that the manuscript is the key to catching the killer. But how?

When Nicholas and Michaela uncover plans for a devastating attack on London, they must race against the clock to stop the killer before it’s too late. Not only are they in danger of losing the manuscript—an object of extreme value—but they’re also at risk of losing more innocent lives: including their own.

With their signature heart-pounding tension and suspense, Catherine Coulter and J.T. Ellison's The Sixth Day is “another amazing entry in this ongoing series” (Associated Press).

Catherine Coulter is the #1 New York Times bestselling author of eighty-four novels, including the FBI Thriller series and The Brit in the FBI international thriller series, cowritten with J.T. Ellison. Coulter lives in Sausalito, California, with her Übermensch husband and their two noble cats, Peyton and Eli. You can reach her at ReadMoi@Gmail.com or visit Facebook.com/CatherineCoulterBooks.

New York Times bestselling author J.T. Ellison writes dark psychological thrillers and pens the Brit in the FBI series with #1 New York Times bestselling author Catherine Coulter. With millions of books in print, her work has won critical acclaim, prestigious awards, and has been published in twenty-seven countries. She is also the Emmy Award–winning cohost of the premier literary television show A Word on Words. Ellison lives in Nashville with her husband and twin kittens. Visit JTEllison.com for more information, and follow her on Twitter and Instagram @ThrillerChick or Facebook.com/JTEllison14.