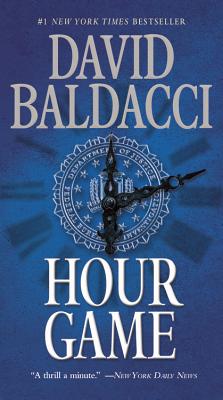 This is book number 2 in the King & Maxwell Series series.

A man accused of burglary seems innocent . . . but in this #1 New York Times bestseller, two ex-Secret Service agents quickly learn that nothing is more dangerous than the truth.

A woman is found murdered in the woods. It seems like a simple case but it soon escalates into a terrible nightmare. Someone is replicating the killing styles of the most infamous murderers of all time. No one knows this criminal's motives...or who will die next.

Two ex-Secret Service agents, Sean King and Michelle Maxwell, have been hired to defend a man's innocence in a burglary involving an aristocratic family. Then a series of secrets leads the partners right into the frantic hunt that is confounding even the FBI. Now King and Maxwell are playing the Hour Game, uncovering one horrifying revelation after another and putting their lives in danger. For the closer they get to the truth, the closer they get to the most shocking surprise of all.

"King and Maxwell are fictional treats, a fabulously entertaining team, and the action is hot and hard."—New York Daily News

"The action is suspenseful and relentless."—Newark Star-Ledger

"Utterly absorbing...spins in unexpected directions...There are terrific action sequences throughout and plenty of suspense...texture and depth...A snappy surprise ending will have Baldacci's many fans remembering why they love this author so much."—Publishers Weekly (starred review)

"HOUR GAME has the elements of a classic Baldacci thriller. His characters keep getting better and richer and the plots-while always tight and well executed-are becoming more intricate and realistic...There is no question: David Baldacci will stay on the bestseller list for a long time to come."—Richmond Times-Dispatch