Halo: Cryptum: Book One of the Forerunner Saga (Compact Disc) 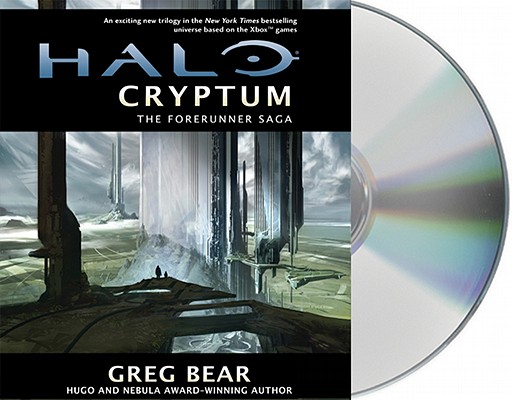 100,000 years ago, the galaxy was populated by a great variety of beings.
But one species--eons beyond all others in both technology and knowledge--achieved dominance.
They ruled in peace but met opposition with quick and brutal effectiveness.
They were the Forerunners--the keepers of the Mantle, the next stage of life in the Universe's Living Time.
And then they vanished.
This is their story.

Bornstellar Makes Eternal Lasting is a young rebellious Forerunner. He is a Manipular, untried--yet to become part of the adult Forerunner society, where vast knowledge and duty waits. He comes from a family of Builders, the Forerunners' highest and most politically powerful rate. It is the Builders who create the grand technology that facilitates Forerunner dominance over the known universe. It is the Builders who believe they must shoulder the greatest burden of the Mantle--as shepherds and guardians of all life.

Bornstellar is marked to become a great Builder just like his father.

But this Manipular has other plans.

He is obsessed with lost treasures of the past. His reckless passion to seek out the marvelous artifacts left behind by the Precursors--long-vanished superbeings of unknowable power and intent---forces his father's hand.

Bornstellar is sent to live among the Miners, where he must come to terms with where his duty truly lies.

But powerful forces are at play. Forerunner society is at a major crux. Past threats are once again proving relentless. Dire solutions--machines and strategies never before contemplated--are being called up, and fissures in Forerunner power are leading to chaos.

On a Lifeworker's experimental planet, Bornstellar's rebellious course crosses the paths of two humans, and the long lifeline of a great military leader, forever changing Bornstellar's destiny ...and the fate of the entire galaxy.

Halo: Cryptum by Greg Bear is a tale of life, death, intergalactic horror, exile, and maturity. It is a story of overwhelming change--and of human origins. For the Mantle may not lie upon the shoulders of Forerunners forever.

Greg Bear is the author of more than thirty books of science fiction and fantasy, including Hull Zero Three, City at the End of Time, Eon, Moving Mars, Mariposa, and Quantico. He is married to Astrid Anderson Bear and is the father of Erik and Alexandra. Awarded two Hugos and five Nebulas for his fiction, one of two authors to win a Nebula in every category, Bear has been called the "Best working writer of hard science fiction" by "The Ultimate Encyclopedia of Science Fiction." His stories have been collected into an omnibus volume by Tor Books. Bear has served on political and scientific action committees and has advised both government agencies and corporations on issues ranging from national security to private aerospace ventures to new media and video game development. His endeavors also include a long-term collaboration with Neal Stephenson and the Subutai Corporation on The Mongoliad, an interactive serial novel available in all major e-book formats.Holter Graham, winner of AudioFile's 2008 Best Voice in Science Fiction & Fantasy for Sherrilyn Kenyon's Acheron, is a stage, television, and screen actor. He has recorded numerous audiobooks, including much of Sherrilyn Kenyon's bestselling Dark-Hunter series. The winner of multiple AudioFile Earphones Awards, he has also read works by Scott Turow, Dean Koontz, C. J. Box, and Stephen Frey.

“Holter Graham does a spending job narrating all the roles…this first in the Forerunner Saga tells an exciting story that spans millennia.” – BookLoons.com