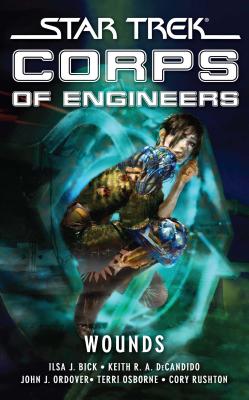 The Dominion War has been over for a year, but its legacy lives on. Commander Sonya Gomez, former Starship Enterprise™ engineer, and her crack Starfleet Corps of Engineers team on the U.S.S. da Vinci find themselves dealing with many permutations of that legacy.

Two mysterious murders on the da Vinci lead to the Gamma Quadrant and a Dominion base. A pre-warp planet occupied by the Dominion still has scars from both sides of that conflict. Plus Gomez, computer expert Soloman, and Security Chief Corsi are haunted by demons from their past.

But the greatest threat of all comes from a visit to Deep Space 9™. A fissure has opened up between realities, endangering the very existence of the Bajoran system -- and also stranding Doctors Lense and Bashir on a war-torn planet from which they may never escape.

Ilsa J. Bick is an award-winning, bestselling author of short stories, ebooks, and novels. She has written for several long-running science fiction series, including Star Trek, Battletech, and Mechwarrior: Dark Age. Her YA works include the critically acclaimed Draw the Dark, Drowning Instinct, and The Sin-Eater’s Confession. Her first Star Trek novel, Well of Souls, was a 2003 Barnes and Noble bestseller. Her original stories have been featured in anthologies, magazines, and online venues. She lives in Wisconsin with her family. Visit her website at IlsaJBick.com.

Keith R.A. DeCandido was born and raised in New York City to a family of librarians. He has written over two dozen novels, as well as short stories, nonfiction, eBooks, and comic books, most of them in various media universes, among them Star Trek, World of Warcraft, Starcraft, Marvel Comics, Buffy the Vampire Slayer, Serenity, Resident Evil, Gene Roddenberry’s Andromeda, Farscape, Xena, and Doctor Who. His original novel Dragon Precinct was published in 2004, and he's also edited several anthologies, among them the award-nominated Imaginings and two Star Trek anthologies. Keith is also a musician, having played percussion for the bands Don't Quit Your Day Job Players, Boogie Knights, and Randy Bandits, as well as several solo acts. In what he laughingly calls his spare time, Keith follows the New York Yankees and practices kenshikai karate. He still lives in New York City with his girlfriend and two insane cats.

TERRI OSBORNE made her professional fiction writing debut in 2003 with the critically acclaimed “Three Sides to Every Story,” the Jake Sisko and Tora Ziyal story in the Star Trek: Deep Space Nine tenthanniversary anthology, Prophecy and Change. Her other fiction work includes “ ‘Q’uandary,” the Selar story in the Star Trek: New Frontier anthology No Limits; Star Trek: S.C.E.: Malefictorum, the landmark fiftieth installment in the series; and “Eighteen Minutes” in the tenth-anniversary anthology Star Trek: Voyager: Distant Shores. Beyond that, she is hard at work at more fiction, both in and out of the Star Trek universe, including an original dark fantasy novel set in Dublin, Ireland in 1940. Find out more about Terri at her Web site: www.terriosborne.com.

Cory Rushton is a Canadian living in the United Kingdom with his lovely and patient wife, Susan, where he teaches English at the University of Bristol. Having now fulfilled a lifelong ambition to write for Star Trek, he feels that retirement from the world is the only rational option.