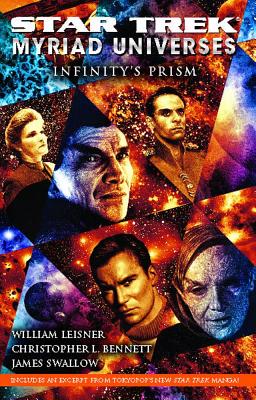 It's been said that for any event, there are an infinite number of possible outcomes. Our choices determine which outcome will follow, and therefore all possibilities that could happen do happen across countless alternate realities. In these divergent realms, known history is bent, like white light through a prism -- broken into a boundless spectrum of what-might-have-beens. But in those myriad universes, what might have been...is what actually happened.

A Less Perfect Union: More than a hundred years after the Terra Prime movement achieved its dream of an isolationist Earth, humanity is once again at a fork in the river of history...and the path it follows may ultimately be determined by the voice of a single individual: the sole surviving crewmember of the first Starship Enterprise.™

Places of Exile: Midway through Voyager's journey across the galaxy, Captain Kathryn Janeway and Commander Chakotay must choose whether to brave a deadly war zone or abandon their quest for home. But an attack by Species 8472 cripples the ship, and the stranded crew must make new choices that will reshape their destinies...and that of the Delta Quadrant itself.

Seeds of Dissent: Khan victorious! Almost four centuries after conquering their world, genetically enhanced humans dominate a ruthless interstellar empire. But the warship Defiance, under its augmented commander, Princeps Julian Bashir, makes a discovery that could shake the pillars of his proud civilization: an ancient sleeper ship from Earth named the Botany Bay.

Christopher L. Bennett is a lifelong resident of Cincinnati, Ohio, with bachelor’s degrees in physics and history from the University of Cincinnati. He has written such critically acclaimed Star Trek novels as Ex Machina, The Buried Age, the Titan novels Orion’s Hounds and Over a Torrent Sea, the two Department of Temporal Investigations novels Watching the Clock and Forgotten History, and the Enterprise novels Rise of the Federation: A Choice of Futures, Tower of Babel, Uncertain Logic, and Live By the Code, as well as shorter works including stories in the anniversary anthologies Constellations, The Sky’s the Limit, Prophecy and Change, and Distant Shores. Beyond Star Trek, he has penned the novels X Men: Watchers on the Walls and Spider Man: Drowned in Thunder. His original work includes the hard science fiction superhero novel Only Superhuman, as well as several novelettes in Analog and other science fiction magazines.

William Leisner is the author of the acclaimed novels Star Trek: The Next Generation: Losing the Peace, and A Less Perfect Union (from the Myriad Universes collection Infinity's Prism).  He is a three-time winner of the late, lamented Star Trek: Strange New Worlds competition, as contributed tales to the official celebration of Star Trek's 40th anniversary in 2006, and TNG's 20th Anniversary in 2007.  A native of Rochester, New York, he currently lives in Minneapolis.

James Swallow is a New York Times and Sunday Times (UK) bestselling author, BAFTA-nominated screenwriter, and the only British writer to have worked on a Star Trek television series. His Star Trek fiction includes The Latter Fire, Sight Unseen, The Poisoned Chalice, Cast No Shadow, Synthesis, Day of the Vipers, The Stuff of Dreams, Infinity’s Prism: Seeds of Dissent, and short stories in Seven Deadly Sins, Shards and Shadows, The Sky’s the Lim­it, and Distant Shores. His other works include the Marc Dane thriller series and tales from the worlds of 24, Doctor Who, Star Wars, Halo, Warhammer 40,000, and more. He lives and works in London.