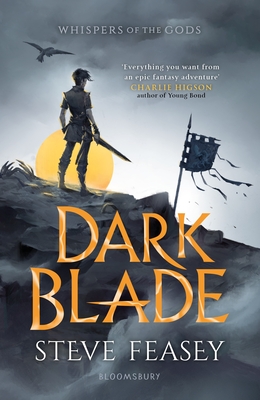 WHEN GODS FAIL, WHO WILL KEEP THE DARKNESS OUT?

Lann knows nothing of his mysterious past, but by his fifteenth birthday he will come face to face with destiny. For Lann must wield the Dreadblade, an ancient sword forged to defeat terrible monsters.

Across the mountains a King has been murdered. His daughter, Astrid, is a warrior with no desire to bear the crown. Only she can uncover her father's killer before her brother is framed for the crime.

Evil is stirring. Lann and Astrid are the kingdom's last defence. Together, they must face the greatest darkness their world has ever known.

Steve Feasey is the author of young adult fantasy novels including Wereling, Dark Moon and Blood Wolf. He lives with his family in Hertfordshire, England, where he sometimes hears a strange and unidentifiable howling just after midnight.

“This has everything you want from an epic fantasy adventure – devious Gods, hideous monsters, a portal to another dimension and a hero with an enchanted blade. Great stuff” —Charlie Higson, author of the Young Bond series

“Terrific, vivid storytelling ... Feasey is a skilled weaver of atmosphere, whether that's the all-consuming fury of a fight, or the oppressive fear born of hunting a monster through a fog-shrouded wood. Dark Blade is a rollicking adventure” —SFX

“Fans of Rick Riordan and John Flanagan have a whole new world of dark magic, mysterious gods and brave heroes waiting for them” —Sebastien de Castell, author of the Spellslinger series

“Dark Blade is a razor-sharp, spellbinding read full of intrigue and magic. This tale truly takes the crown as the young heir to the likes of Game of Thrones and Throne of Glass
” —Chris Bradford, author of the Young Samurai series

“A daring and exciting swords-and-sorcery fantasy – traditional in the very best sense of the word. I thoroughly enjoyed this classic tale of monsters, magic and swashbuckling adventure” —Kesia Lupo, author of We Are Blood and Thunder

“Feasey brings us a fresh new fantasy hero in the form of Lann Fetlanger. The world of Strom is rich with peril, political intrigue, conspiracies and betrayals ... Conflicted heroes, cursed swords, diabolical sorcerers and warrior princesses. Why aren't you reading this already?
” —Sarwat Chadda, author of The Ash Mistry Chronicles series

“An epic dark fantasy set in an arcane world where kings are murdered, monsters roam and ordinary boys are given extraordinary gifts” —Mark Walden, author of the H.I.V.E. series

“A powerful, compelling story in a world that stays with you” —Angie Sage, author of the Septimus Heap series

“a wonderful action-adventure book which would especially appeal to people who like Nordic mythology. The plot has some great twists and turns […] I would definitely read this again” —Teen Titles