I Have a Bad Feeling about This (Paperback) 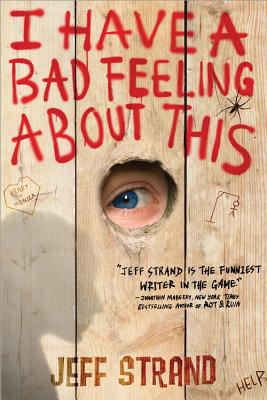 The perfect blend of horror and humor, I Have a Bad Feeling About This is a laugh-out-loud wilderness comedy about an ultimate survival camp that takes a deadly turn...

Wilderness Survival Tip #1
Drinking your own sweat will not save your life. Somebody might have told you that, but they were trying to find out if you'd really do it.

Wilderness Survival Tip #2
In case of an avalanche, don't despair. You're doomed, but that's a wicked cool death.

Wilderness Survival Tip #3
If you're relying on this book for actual survival tips, you're dead already.

Henry Lambert would rather play video games than spend time in the great outdoors--but that doesn't make him a wuss. Skinny nerd? Fine. But wuss is a little harsh. Sadly, his dad doesn't agree. Which is why Henry is being shipped off to Strongwoods Survival Camp.

Strongwoods isn't exactly as advertised. It looks like the victim of a zombie apocalypse, the "camp director" is a psycho drill sergeant, and Henry's sure he saw a sign written in blood...

Also by Jeff Strand:
A Bad Day for Voo Doo
The Greatest Zombie Movie Ever
How You Ruined My Life
Stranger Things Have Happened