The Lady or the Lion (Large Print / Paperback) 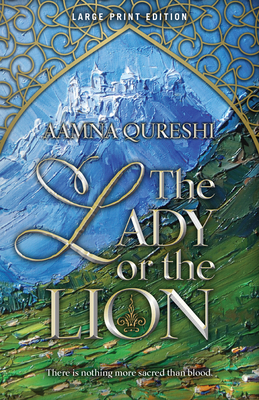 Once upon a time, in a very olden time, there lived a semi-barbaric king . . .

This is not his story.

Perfect for fans of These Violent Delights and The Wrath and the Dawn, this scintillating debut retells "The Lady or the Tiger?" against a Pakistan-inspired world of forbidden love and court intrigues.

As crown princess of Marghazar, Durkhanai Miangul will do anything to protect her people and her land. When her grandfather, the Badshah, is blamed for a deadly assault on the summit of neighboring leaders, the tribes call for his head. To assuage cries for war, the Badshah opens Marghazar's gates to foreigners for the first time in centuries, in a sign of good faith. His family has three months to prove their innocence, or they will all have war.

As Durkhanai races to solve who really orchestrated the attack, ambassadors from the neighboring tribal districts arrive at court, each with their own intentions for negotiations, each with their own plans for advantage. When a mysterious illness spreads through the villages and the imperialists push hard on her borders, Durkhanai must dig deep to become more than just a beloved princess-she must become a queen.

To distract Durkhanai from it all is Asfandyar Afridi, the wry ambassador who tells her outright he is a spy, yet acts as though he is her friend-or maybe even something more.

"Qureshi sets up a world in which readers can easily lose themselves . . . this is a notable debut with an original point of view and a riveting plot." -Kirkus Reviews

"An intricate deep dive into a forbidden love story and all the stages in-between. Aamna Qureshi writes of a world steeped in rich culture and tumultuous politics with an expert hand. The Lady or The Lion is a gorgeous read." -Chloe Gong, New York Times bestselling author of These Violent Delights