The Coldest Winter Ever (Hardcover) 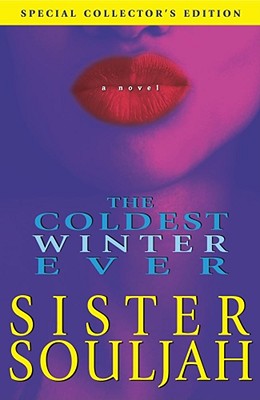 In The Coldest Winter Ever, internationally known author, activist, and hip-hop artist Sister Souljah brought the streets of New York to life in a powerful and unforgettable first novel. Beautifully written, raw, and authentic, this novel firmly established Sister Souljah as the mother of all contemporary urban literature and the author of the first classic of the genre.
I came busting into the world during one of New York's worst snowstorms, so my mother named me Winter.
Ghetto-born, Winter is the young, wealthy daughter of a prominent Brooklyn drug-dealing family. Quick-witted, sexy, and business-minded, this teenage female hustler knows and loves the streets like the curves of her own body. But when a cold wind blows her life in a direction she never expected, her street smarts and seductive skills are put to the test of a lifetime.
In this special gift edition, Sister Souljah shares her secret thoughts on creating the story that rocked ghettos worldwide and introduced all readers to the real ghetto experience. For the first time ever, readers will discover the answers to the continuous questions asked by her fans. Souljah discusses the symbolism behind characters like Midnight and Santiaga, as well as the many meanings of the story. Readers will also learn about Souljah's unique writing process and exactly what inspired her to pen the definitive novel of the hip-hop generation. In her own voice, Souljah will share why this novel is truly a story of our time.

Sister Souljah is best known for her work as a political activist and educator of underclass urban youth. A graduate of Rutgers University, she is a beloved personality in her own community. She lives in New York with her husband and son.

Sean "P. Diddy" Combs Sister Souljah is the #1 author of the hip-hop generation.

Walter Mosley Souljah, an Emile Zola of the hip-hop generation, has written a naturalist novel of a world without redemption. Her story, like the cultures it exposes, is an unflinching eye at the truth.

The New Yorker Winter is nasty, spoiled, and almost unbelievably libidinous, and it's ample evidence of the author's talent that she is also deeply sympathetic.

Black Issues Book Review Souljah adds a new voice to the most marginalized of the marginalized.

The Source Sometimes the stuggle has to be repackaged to get a point across. Sister Souljah, one of hip-hop's perennial forces and a self-described "raptivist," does this with her first novel....The Coldest Winter Ever is a platform for this resourceful young activist to spread messages that are clear, concise, and true to the game.

Jada Pinkett Smith I think she is an important voice in American literature, and I find her work spiritually rewarding and powerful.