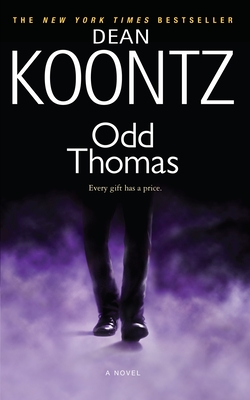 This is book number 1 in the Odd Thomas series.

Meet Odd Thomas, the unassuming young hero of Dean Koontz’s dazzling New York Times bestseller, a gallant sentinel at the crossroads of life and death who offers up his heart in these pages and will forever capture yours.

“The dead don’t talk. I don’t know why.” But they do try to communicate, with a short-order cook in a small desert town serving as their reluctant confidant. Sometimes the silent souls who seek out Odd want justice. Occasionally their otherworldly tips help him prevent a crime. But this time it’s different.

A stranger comes to Pico Mundo, accompanied by a horde of hyena-like shades who herald an imminent catastrophe. Aided by his soul mate, Stormy Llewellyn, and an unlikely community of allies that includes the King of Rock ’n’ Roll, Odd will race against time to thwart the gathering evil. His account of these shattering hours, in which past and present, fate and destiny, converge, is a testament by which to live—an unforgettable fable for our time destined to rank among Dean Koontz’s most enduring works.

Dean Koontz, the author of many #1 New York Times bestsellers, lives in Southern California with his wife, Gerda, their golden retriever, Elsa, and the enduring spirit of their goldens, Trixie and Anna.

"Once in a very great while, an author does everything right—as Koontz has in this marvelous novel.... the story, like most great stories, runs on character—and here Koontz has created a hero whose honest, humble voice will resonate with many.... This is Koontz working at his pinnacle, providing terrific entertainment that deals seriously with some of the deepest themes of human existence: the nature of evil, the grip of fate and the power of love."—Publishers Weekly

"Dean Koontz almost occupies a genre of his own. He is a master at building suspense and holding the reader spellbound."—Richmond Times-Dispatch

"Dean Koontz is not just a master of our darkest dreams, but also a literary juggler."—The Times (London)

"Once more Dean Koontz presents readers with a story and cast of characters guaranteed to entertain."—Tulsa World