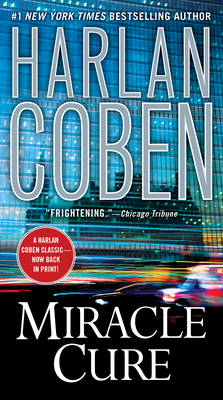 By Harlan Coben
Email or call for price
Special Order

A husband and wife race to find a cure for the disease that has inspired a serial killer to terrorize Manhattan in this classic medical thriller from the bestselling author and creator of the hit Netflix drama The Stranger.

They’re one of the country’s most telegenic couples: beloved TV journalist Sara Lowell and New York’s hottest basketball star, Michael Silverman. Their family and social connections tie them to the highest echelons of the political, medical, and sports worlds—threads that will tangle them up in one of the most controversial and deadly issues of our time.

In a clinic on Manhattan’s Upper West Side, a doctor has dedicated his life to eradicating a divisive and devastating disease. One by one, his patients are getting well. One by one, they’re being targeted by a serial killer. And now Michael has been diagnosed with the disease. There’s only one cure, but many ways to die...

With more than seventy million books in print worldwide, Harlan Coben is the #1 New York Times bestselling author of thirty novels, including the Myron Bolitar series and a series aimed at young adults featuring Myron's newphew, Mickey Bolitar. His books are published in forty-three languages around the globe and have been number one bestsellers in more than a dozen countries. The winner of the Edgar, Shamus, and Anthony Awards, he lives in New Jersey.

“Coben is one of the best authors around at writing page-turning suspense…He has a knack for hooking readers right away and holding their interest as they zoom through his plots.”—Chicago Sun-Times

“Nobody writes them better than Coben.”—Associated Press

“What Coben does best is take readers into his characters’ hearts and minds.”—USA Today

“Every time you think Harlan Coben couldn’t get any better at uncoiling a whipsnake of a page-turner, he comes along with a new novel that somehow surpasses its predecessor.”—The San Francisco Chronicle

“Coben is the undisputed modern master of the suburban thriller.”—The Philadelphia Inquirer