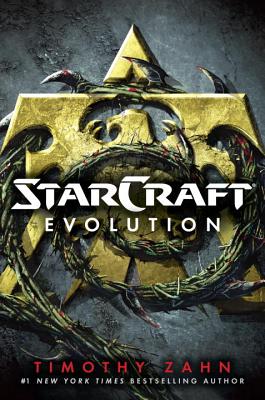 By Timothy Zahn
Email or call for price
Special Order
This book cannot be returned to Book Moon.

After nearly a decade of brutal warfare, three mighty factions—the enigmatic protoss, the savage zerg, and the terrans, humanity’s descendants in the sector—have entered a cease-fire, but the peace is tenuous at best. When the sudden restoration of an incinerated planet is brought to light, tensions erupt. Neutrality swings back to hostility, and old enemies are accused of developing biological weapons to reignite the bitter conflict.

An expedition of terran and protoss soldiers and researchers is deployed to investigate the mysterious zerg planet and its inhabitants’ intentions. But the lush alien landscape is host to other denizens, creatures shrouded in shadow, and should they be unleashed, they will change the fate of the entire galaxy.

“This one is definitely a fun read.”—Analog

Timothy Zahn is the author of more than forty novels, nearly ninety short stories and novellas, and four short-fiction collections. In 1984, he won the Hugo Award for Best Novella. Zahn is best known for his Star Wars novels (Heir to the Empire, Dark Force Rising, The Last Command, Specter of the Past, Vision of the Future, Survivor’s Quest, Outbound Flight, Allegiance, Choices of One, and Scoundrels), with more than four million copies of his books in print. Other books include the Cobra series, the Quadrail series, and the young adult Dragonback series. Zahn has a B.S. in physics from Michigan State University and an M.S. from the University of Illinois. He lives with his family on the Oregon coast.

“This one is definitely a fun read.”—Analog