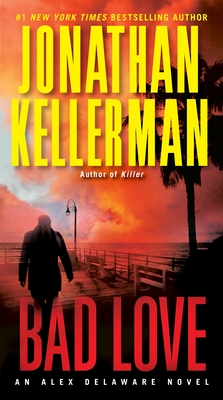 This is book number 8 in the Alex Delaware series.

It came in a plain brown wrapper, no return address—an audiocassette recording of a horrifying, soul-lacerating scream, followed by the sound of a childlike voice chanting: “Bad love. Bad love. Don’t give me the bad love.” For Alex Delaware the tape is the first intimation that he is about to enter a living nightmare. Others soon follow: disquieting laughter echoing over a phone line that suddenly goes dead, and a chilling act of trespass and vandalism. He has become the target of a carefully orchestrated campaign of vague threats and intimidation rapidly building to a crescendo as harassment turns to terror, mischief to madness.

With the help of his friend, LAPD detective Milo Sturgis, Alex uncovers a series of violent deaths that may follow a diabolical pattern. And if he fails to decipher the twisted logic of the stalker’s mind games, Alex will be the next to die.

Jonathan Kellerman is the #1 New York Times bestselling author of more than forty crime novels, including the Alex Delaware series, The Butcher’s Theater, Billy Straight, The Conspiracy Club, Twisted, True Detectives, and The Murderer’s Daughter. With his wife, bestselling novelist Faye Kellerman, he co-authored Double Homicide and Capital Crimes. With his son, bestselling novelist Jesse Kellerman, he co-authored A Measure of Darkness, Crime Scene, The Golem of Hollywood, and The Golem of Paris. He is also the author of two children’s books and numerous nonfiction works, including Savage Spawn: Reflections on Violent Children and With Strings Attached: The Art and Beauty of Vintage Guitars. He has won the Goldwyn, Edgar, and Anthony awards and the Lifetime Achievement Award from the American Psychological Association, and has been nominated for a Shamus Award. Jonathan and Faye Kellerman live in California and New Mexico.

“Bad Love will have you looking over your shoulder before you turn out the lights.”—Detroit Free Press

“By the end I was fairly racing through the pages.”—Los Angeles Times