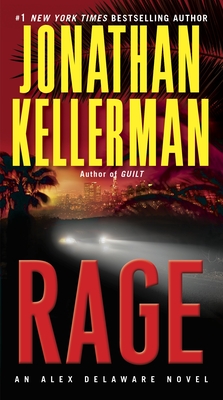 This is book number 19 in the Alex Delaware series.

Troy Turner and Rand Duchay were barely teenagers when they murdered a younger child. While Troy died violently behind bars, the hulking, slow-witted Rand managed to survive his stretch. Now, at age twenty-one, he’s emerged a haunted, rootless man with a pressing need: to talk—once again—with psychologist Alex Delaware. But when Rand’s life comes to a brutal end, his words die with him.

LAPD homicide detective Milo Sturgis suspects that either karma or revenge caught up with Rand, but Delaware’s suspicions run darker. As Delaware and Sturgis retrace their steps through a grisly murder case that devastated a community, they discover madness, suicide, and even uglier truths waiting to be unearthed. And the nearer they come to understanding an unspeakable crime, the more harrowingly close they get to unmasking a monster hiding in plain sight.

“Chilling . . . Kellerman is a writer who knows how to create maximum impact and Rage is aptly named.”—Orlando Sentinel

“[Kellerman is] a master of the grab-the-reader contest. . . . The chills start within the first two pages.”—Saint Paul Pioneer Press