The Gods of Guilt (A Lincoln Lawyer Novel #5) (Hardcover) 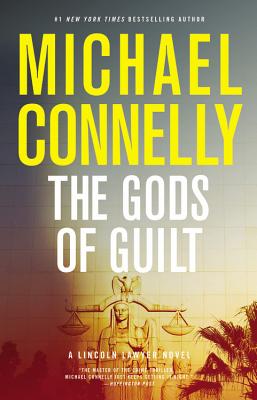 By Michael Connelly
Email or call for price
Special Order

This is book number 5 in the A Lincoln Lawyer Novel series.

A special signed limited edition of the riveting new courtroom thriller from #1 New York Times bestselling author Michael Connelly: Lincoln Lawyer Mickey Haller defends a murder case in which the victim was his former client. Is Mickey to blame?

Mickey Haller gets the text, "Call me ASAP - 187," and the California penal code for murder immediately gets his attention. When he learns that the victim was a prostitute he once represented and thought he had rescued, he knows there is no way he'd let this one go. He soon finds out that she had been back in LA and back in the life. Far from saving her, Mickey may have been the one who put her in danger.

Mickey must follow his gut instinct directly into a dark, dangerous world to get justice for both of his clients, living and dead. As he faces the "gods of guilt"-the jurors who will ultimately deliver the verdict in court-he's forced to struggle with his personal demons for a shot at his own redemption. THE GODS OF GUILTshows once again why "Michael Connelly excels, easily surpassing John Grisham in the building of courtroom suspense" (Los Angeles Times).

Michael Connelly is the author of twenty-five previous novels including the #1 New York Times bestsellers The Black Box, The Drop, The Fifth Witness, The Reversal, "The Scarecrow," "The Brass Verdict," and "The Lincoln Lawyer. "His books, which include the bestselling Harry Bosch series, have sold more than fifty million copies worldwide. He is a former newspaper reporter who has won numerous awards for his journalism and his novels. He spends his time in California and Florida.

"Connelly knows when to put his foot on the gas and when to take it off. Once he has you on board, turning the pages, you won't want to climb off."
--Chuck Leddy, Boston Globe—-

"Connelly's work has it all---sharply drawn, engaging characters, snappy dialogue, and a plot that moves like a shot of Red Bull."
--San Francisco Chronicle—-

"Michael Connelly may be the best thriller writer we have."
--Jane Henderson, St. Louis Post-Dispatch—-

"Any new book by Michael Connelly is a cause for celebration....Connelly is one of the best crime story writers on the scene today. Each new novel refines his talent and makes its story one to be remembered."
--Jackie Cooper, Huffington Post—-