The Ministry for the Future: A Novel (Hardcover) 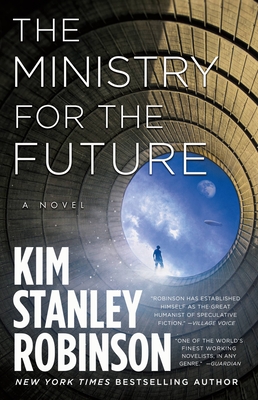 I find this novel hard to recommend but also hard not to just ask you to stop reading this and start reading it. Robinson's an optimist and there is some huge hand waving in a few sections where large swaths of various populaces start behaving in ways that are better for the planet and for us. But besides that, this is a clear-eyed view of the way that the next few decades might unroll.

This has one of the darkest starts to a novel I've read and the point of view character isn’t the one I’d expected or hoped for in that situation but I am writing my reservations out first so that I can get to the rest of the book. Robinson is as comfortable describing an Irish middle-aged politician's swimming routine as he is describing global weather interactions. The point of view shifts between a few characters, some of whom know more than others. The questions posed are on a global scale: if there are 500 people, mostly men, who control the oil production and distribution in the world, should they be held accountable for the present and future cost of that oil?

It is a great, huge, scary book. I could hardly put it down even as I sometimes wished it would just go away. But, for those of us lucky enough to survive, the future isn’t going away and Robinson’s great achievement is that he shows that there are some people out there who will do the work of equality and justice, not just for some, but for all.

ONE OF BARACK OBAMA’S FAVORITE BOOKS OF THE YEAR

"If I could get policymakers, and citizens, everywhere to read just one book this year, it would be Kim Stanley Robinson’s The Ministry for the Future." —Ezra Klein (Vox)

The Ministry for the Future is a masterpiece of the imagination, using fictional eyewitness accounts to tell the story of how climate change will affect us all. Its setting is not a desolate, postapocalyptic world, but a future that is almost upon us. Chosen by Barack Obama as one of his favorite books of the year, this extraordinary novel from visionary science fiction writer Kim Stanley Robinson will change the way you think about the climate crisis.

"One hopes that this book is read widely—that Robinson’s audience, already large, grows by an order of magnitude. Because the point of his books is to fire the imagination."―New York Review of Books

"If there’s any book that hit me hard this year, it was Kim Stanley Robinson’s The Ministry for the Future, a sweeping epic about climate change and humanity’s efforts to try and turn the tide before it’s too late." ―Polygon (Best of the Year)

"[The Ministry for the Future] struck like a mallet hitting a gong, reverberating through the year ... it’s terrifying, unrelenting, but ultimately hopeful. Robinson is the SF writer of my lifetime, and this stands as some of his best work. It’s my book of the year." —Locus

Kim Stanley Robinson is a New York Times bestselling author and winner of the Hugo, Nebula, and Locus awards. He is the author of more than twenty books, including the bestselling Mars trilogy and the critically acclaimed Forty Signs of Rain, The Years of Rice and Salt and 2312. In 2008, he was named a "Hero of the Environment" by Time magazine, and he works with the Sierra Nevada Research Institute. He lives in Davis, California.

"[A] compelling work of speculative fiction about solving the climate crisis around the world... This story is heavy but important. Be prepared to lose sleep as you won't want to pause for anything."—AudioFile on The Ministry for the Future

"Score a point for the audacity of hope....Robinson digs deep into how, with institutional support and some off-the-books black ops, revolutionary ideas could still seize our world."—Shelf Awareness on The Ministry for the Future

"[A] gutsy, humane view of a near-future Earth...Robinson masterfully integrates the practical details of environmental crises and geoengineering projects into a sweeping, optimistic portrait of humanity's ability to cooperate in the face of disaster. This heartfelt work of hard science-fiction is a must-read for anyone worried about the future of the planet."—Publishers Weekly (starred) on The Ministry for the Future

"Tremendously engaging."—Chicago Review of Books on The Ministry for the Future

"So far, the best descriptions of what this new world could be like come from Kim Stanley Robinson, a science-fiction author who specializes in depicting the kinds of delights that a world that took our predicament seriously might produce."—The New Yorker on The Ministry for the Future