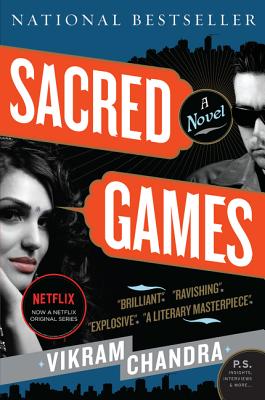 “SACRED GAMES [is] as hard to put down as it is to pick up.”
— New York Times Book Review

Seven years in the making, Sacred Games is an epic of exceptional richness and power. Vikram Chandra's novel draws the reader deep into the life of Inspector Sartaj Singh—and into the criminal underworld of Ganesh Gaitonde, the most wanted gangster in India.

Sartaj, one of the very few Sikhs on the Mumbai police force, is used to being identified by his turban, beard and the sharp cut of his trousers. But "the silky Sikh" is now past forty, his marriage is over and his career prospects are on the slide. When Sartaj gets an anonymous tip-off as to the secret hide-out of the legendary boss of G-Company, he's determined that he'll be the one to collect the prize.

Vikram Chandra's keenly anticipated new novel is a magnificent story of friendship and betrayal, of terrible violence, of an astonishing modern city and its dark side. Drawing inspiration from the classics of nineteenth-century fiction, mystery novels, Bollywood movies and Chandra's own life and research on the streets of Mumbai, Sacred Games evokes with devastating realism the way we live now but resonates with the intelligence and emotional depth of the best of literature.

“SACRED GAMES [is] as hard to put down as it is to pick up.”
— New York Times Book Review

“Page after page it plucks me from the here and now.”
— Sven Birkerts, Boston Sunday Globe

“Chandra…knows exactly when to break rules and when to follow them…Chandra’s genius is in the way he trusts his reader.”
— Los Angeles Times

“Ambitious, sprawling...combines the attractions of 19th-century fiction and a modern police procedural.”
— People

“As sprawling as the heat-drenched city it richly portrays.”
— New York Times

“It’s a rare pleasure to be arrested by this novel’s thunderous momentum...Few readers will be unenthralled.”
— Bruce Allen, Boston Sunday Globe

“One of the most brilliant...tales I’ve read in years...SACRED GAMES is compulsively readable.”
— Eric Ormsby, New York Sun

“Intoxicating... SACRED GAMES offers up a world worthy of the effort required to take it all in.”
— Rocky Mountain News

“A terrific, brilliant earthmover of a book. Crime and Punishment crossed with The Godfather, with some Sopranos-inspired irony.””
— John Freeman, Atlanta Journal-Constitution

“The pacing and mother lode of cinematic details in the narrative make the journey...worth taking, even more than once.”
— Daily News

“Electrifying…Chandra pulls off some extraordinary writing…He…hands us the keys to the city and reveals its sordid mysteries.”
— Carl Bromley, The Nation

“SACRED GAMES won’t deliver nirvana, but submerging in it, like the Ganges itself, can restore your wonder.”
— Cleveland Plain Dealer

“A grand story...carefully and passionately told…The temptation upon turning the last page will be to return to the first.”
— Denver Post

“A pulsing thriller...Quite enough to enrapture a reader for 900 pages...the payoff is grand and satisfying.”
— Seattle Times

“Exhilaratingly ambitious and entertaining…[A] vivid portrait of the clash and jangle and excitement of modern-day Mumbai.”
— BookPage

“An irresistible story that you simply cannot keep out of your head...It is, more than anything else, literary magic.”
— Christian Science Monitor

“Superb…complex, mesmerizing...a full-immersion experience, as if Dickens had written THE GODFATHER and placed it in India.”
— Grand Rapids Press

“Rich...Utterly convincing..A monumental portrait of interwoven lives that lingers with a reader long after the case is closed.”
— Globe and Mail (Toronto)

“Masterfully crafted fiction…the resonance and elegance...of his writing…put across the full vulnerability and humanity of his characters.”
— Blogcritics.org Books

“Unstinting in its ambition...flourishing in its characters…[An] intriguing act of literary decolonization…Sacred Games is cinematic in scope.”
— Newsweek International Edition