The Card: Collectors, Con Men, and the True Story of History's Most Desired Baseball Card (Hardcover) 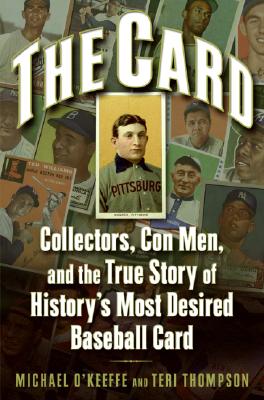 By Michael O'Keeffe, Teri Thompson
$24.95
Email or call for price.

Since its limited release just after the turn of the twentieth century, this American Tobacco cigarette card has beguiled and bedeviled collectors. First identified as valuable in the 1930s, when the whole notion of card collecting was still young, the T206 Wagner has remained the big score for collectors who have scoured card shows, flea markets, estate sales, and auctions for the portrait of baseball's greatest shortstop.

Only a few dozen T206 Wagners are known to still exist. Most, with their creases, stains, and dog-eared corners, look worn and tattered, like they've been around for almost a century. But one—The Card—appears to have defied the travails of time. Thanks to its sharp corners and its crisp portrait of Honus Wagner, The Card has become the most famous and desired baseball card in the world.

Over the decades, as The Card has changed hands, its value has skyrocketed. It was initially sold for $25,000 by a small card shop in a nondescript strip mall. Years later, hockey great Wayne Gretzky bought it at the venerable Sotheby's auction house for $451,000. Then, more recently, it sold for $1.27 million on eBay. Today worth over $2 million, it has transformed a sleepy hobby into a billion-dollar industry that is at times as lawless as the Wild West. The Card has made men wealthy, certainly, but it has also poisoned lifelong friendships and is fraught with controversy—from its uncertain origins and the persistent questions about its provenance to the possibility that it is not exactly as it seems.

Now for the first time, award-winning investigative reporters Michael O'Keeffe and Teri Thompson follow the trail of The Card from a Florida flea market to the hands of the world's most prominent collectors. They delve into a world of counterfeiters and con men and look at the people who profit from what used to be a kids' pastime, as they bring to light ongoing investigations into sports collectibles. O'Keeffe and Thompson also examine the life of the great Honus Wagner, a ballplayer whose accomplishments have been eclipsed by his trading card, and the strange and fascinating subculture of sports memorabilia and its astonishing decline.

Intriguing and eye-opening, The Card is a ground-breaking look at a uniquely American hobby.

Michael O'Keeffe is an award-winning journalist who is a member of the New York Daily News sports investigation team. He has been a reporter and editor for more than twenty years. A graduate of the University of Colorado, he lives in Brooklyn with his wife and son.

Teri Thompson is a former top editor at the New York Daily News, where she created the newspaper’s award-winning sports investigative team that broke the Chuck Blazer story in 2014. Before coming to the News, she was a sports  olumnist at the Rocky Mountain News and an editor at ESPN. She has co-authored two books, including the critically acclaimed “American Icon: The Fall of Rogers Clemens and the Rise of Steroids in America” and is also a member of the Connecticut bar.